Zaytuna Farm is situated on a sixty-six acre (27 hectares) property that fronts Terania Creek opposite the village of The Channon, Northern NSW. The property contains 800m of creek frontage, numerous swimming holes and abundant wildlife. The landscape is diverse, covering high frost-free hilltops, ridges and valleys with both cleared paddocks and forested areas.

Zaytuna Farm is a working permaculture education and demonstration farm under continuous development and with ever-changing and evolving on ground research in practice; work is consistently in progress to develop new more efficient and productive systems. Situated in subtropical Northern New South Wales it offers students the opportunity to learn while experiencing a real-life permaculture farming and gardening live in working experience situation. In addition to classroom time, students will train and work on daily farm duties interacting and caring for farm systems which can include animals, crops, trees, nursery, aquatics, irrigation, renewable energy, waste, and recycling. Other tasks include looking at design in the landscape, making compost, natural fertilisers, testing soil, basic surveying, and completing design exercises.

There is an integrated water harvesting system of multiple dams, ponds, and swales, with gravity irrigation throughout the property. Farm electricity is all stand-alone off-grid solar with generator back up, all toilets are state of the art composting toilets, all grey waste systems are gravel reed bed natural biological cleaning system all approved by the local government.

Zinc-allum metal roofing on all buildings harvests rainwater to water tanks and is pumped to a tank at the top of the property and supplies excellent pressure high-quality showering, washing, and drinking water to all the built infrastructure on-site, all approved by the local government.

The continuous daily food production on the farm includes a large diversity of mixed vegetables and herbs including aquatic crops, fruits in season, chickens for eggs and meat plus ducks, quail, turkey, rabbits and fish, milk and dairy products from a small dairy house cow herd plus a small beef herd. All animals that are processed for food are very carefully, precisely and humanely slaughtered, butchered and prepared for consumption on the farm.

The farm has a large diversity of bamboo production for food and timber plus farm forestry and reforestation including riverbank stability projects.

Zaytuna Farm was the first Master Plan site but with The Permaculture Research Institute’s mission, many more have since flourished. 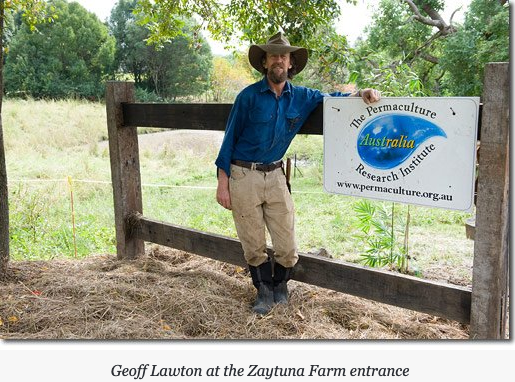 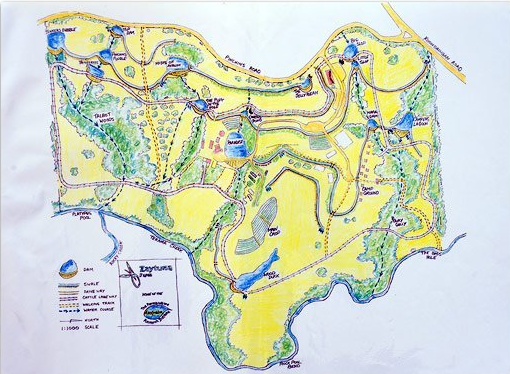 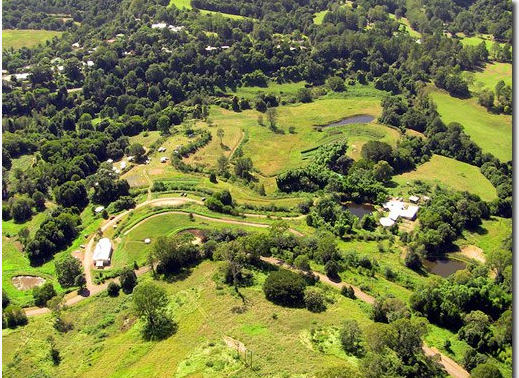 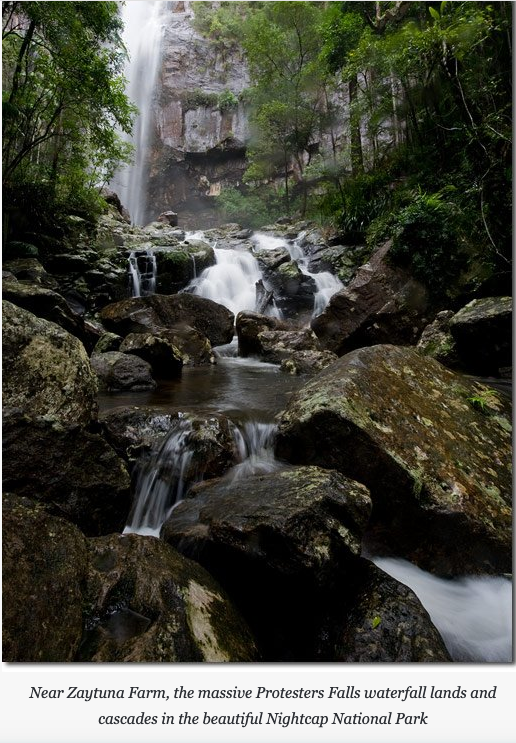 Having spent the last few years seeking to establish and assist projects worldwide, and hearing some readers requesting more info on our own permaculture base site, I thought it high time I take a moment away from promoting other projects to shine a little light on our own work!

It had been a long time since I last visited Zaytuna Farm. Arriving in April 2012, more than two and a half years after my September 2009 visit, I was somewhat taken aback…. Back in 2009 the farm could somewhat be described as an unruly child — full of energy and enthusiasm, and flush with life, but not at all mature. Now, as I see Geoff Lawton’s vision for the property being played out more fully, we could compare the farm to more of a blossoming and beautiful teenager, still fresh in youth, but demonstrating a clearer sense of direction.

Geoff’s long term strategies are becoming evident, and it really is a sight, and site, to behold!

Before Geoff took on the 66-acre farm, back in 2001, it had been a cattle property for many years. Without proper livestock management, the soil had become compacted, drought-prone, and unproductive. Bracken fern and blady grass were trying to pioneer in the dry sandy soil.

In true permaculture style, Geoff laid out a mainframe design that would take nature’s own restoration process, and significantly speed it up, starting with the all-important aspects of water harvesting, storage and infiltration. A large dam was created (later to become ‘Paradise’, both by name and nature) with the first swale attached, and the first straw bale buildings went up alongside. More earthworks and initial plantings took place until June 2003, when Geoff left the site to its own devices, virtually abandoned, as he worked internationally for over three years. Site establishment didn’t resume until August 2006, and my first visit to the site was in 2008.

Arriving on the farm last month (April 2012), and winding my way down the driveway towards Geoff and Nadia’s strawbale home in the centre of the property, the first thing that struck me was the leap in biomass. In a carefully orchestrated development and migration of productivity, food forests that had been compact and immature were now not only reaching climax, but their borders were being greatly enlarged — the many plants and trees spawning siblings and spreading, with the help of a positive human, and animal, interventions, like a corridor of abundance across the site.

After arriving at the house, the next big evolution I discovered was with another food forest — one totally in its infancy on my last visit, with chicken tractors still preparing the ground — which had since surged into teenage status. The nutrient flow of animal systems (ducks, chickens and a little cattle milking station) upslope from the forest had assisted in rapid development, and today chickens and ducks are free-ranging over an area abundant in citrus, passionfruit, tamarillo, guava, custard apple, climbing pumpkin and much more, maintaining the system free of pests and weeds and keeping it fertilised as they go.

The increase in student attendance meant the kitchen garden had to move to another, more expansive location, and its former site instead became an urban garden demonstration site, complete with a closed-loop aquaculture system and ornamental pond.

Student accommodations and utilities have gone through some evolutions as well. Basic camping on the site has improved, with new roofed platforms giving protection from the elements above and below. A student common room provides some study and social space for the evenings, with fast internet access, and a rocket stove with trailing greywater reed bed filtration system provides not only an excellent supply of hot water and subsequent biological cleaning, but also a good demonstration of appropriate low-input, low-tech elements that work.

The block was being enlarged as I left this month, and a new improved rocket stove will soon be in place. Plans are also crystalising for a whole new student complex, including showers, toilets, kitchen and accommodations.

There was one major high-tech addition also, however. Even permaculture students arrive almost bristling with electricity-consuming gadgets and personal power-hungry lifestyles, and so, being an off-grid demonstration site, the farm has had to significantly upgrade its power system.

Our local solar wizard has labeled all the common room appliances with their respective power consumption levels, to help students appreciate the real implications of the switch-flicking we’ve come to take so much for granted, but which, in a mainstream setting, is so damaging. 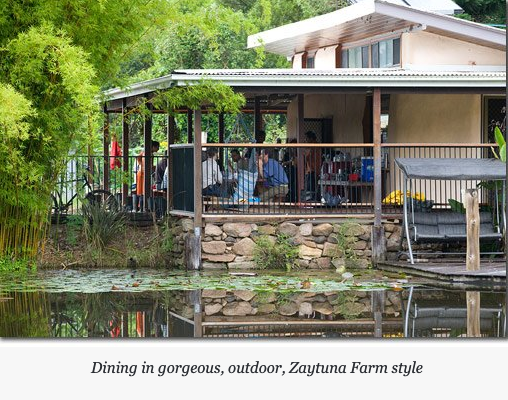